*This is a new feature I’m trying out for the blog: instead of 5-minute book prescriptions, I will occasionally suggest an author, who has written multiple great books and of whom I suggest embarking on a study.

A few weeks ago, as the official end of summer approached, I quickly inhaled Gabrielle Zevin’s new book Young Jane Young, which tells the story of college student Aviva Grossman, who takes an internship with a charismatic Florida congressman named Aaron Levin. As a result of the complicated web of desire, flattery and normal young adult impulses, Aviva embarks on a months long relationship with the much older man. Since the story takes place around 2001, blogs are just starting to become a thing and Aviva decides to write about her experiences on what she thinks is a completely anonymous website. But when a car accident reveals the congressman and intern together in a car, people start digging and the truth comes out, along with the sordid details Aviva wrote about on her blog. The senator, as one might expect, emerges somewhat unscathed over the years, continuing his career. Aviva, on the other hand, becomes a punch line, a joke. Unable to get a job, notorious nearly everywhere she goes in South Florida, Aviva falls into a deep funk, floundering the days away at her parent’s house, immobilized by shame, fear, misery and anger.  Eventually she decides to make a change–literally. She legally changes her name to Jane Young, borrows money from her kind grandma and moves all the way North, to a small town in  Maine called Allison Springs. Oh and did I mention that she is pregnant?

It was charming and funny and quirky– not unlike another novel of hers that I read and loved last year: The Storied Life of A.J. Fikry.  In that funny, sad, hopeful tale, we meet a widowed bookstore owner who finds a baby on his doorstep one morning and decides to become her caretaker.

As I finished up Young Jane Young, I found myself pondering Zevin and her unique literary voice. In addition to featuring cranky but lovable characters, Zevin often deploys some kind of interesting plot detail or point of view choice, that feels… well, weird! In Young Jane Young, the philandering congressman’s wife, who has recently been through cancer, has an invisible pet parrot that is always with her, squawking the truth whether she wants to hear it or not. 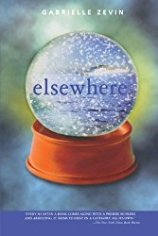 In Elsewhere, an utterly delightful and moving story that features more than a little weirdness, the book begins with the narrative perspective of the deceased teenage girl’s dog. Shortly after, the girl herself, 15-year old Liz, wakes up on a boat and learns that she has died after being hit by a taxi, and is on her way to the afterlife, where she will age backwards before being sent back to earth again as a baby. Although this ambitious plot is not without holes, I found it to be an incredibly moving and comforting way to think about life after death. Give this to someone who has recently lost a person near and dear to them.

Sorry, I digressed a bit about Elsewhere. Back to the weirdness I was talking about before. It almost seems as if Zevin sometimes starts to write one kind of book and ends up writing another. And yet– it always works! Despite, or maybe because of her quirkiness, Gabrielle Zevin has recently become one of my favorite working novelists. She is an author you can give to almost anyone: your aging parents, your 1- year old niece, your 30-year old coworker. Zevin’s stories are wonderfully universal, exhibiting a lovely understanding and forgiveness of human nature. Her stories will absolutely stick with you long after you finish reading them and will encourage you to think about life and death in ways you maybe haven’t before.

Last night as I wondered one of my favorite bookstores, I looked for extra copies of each of the three books of hers I have read so far, so that I could stockpile them to give as gifts. If there’s a better endorsement for an author, I don’t know what it is. I recommend starting with The Storied Life, as I did, followed by Young Jane Young, and, finally Elsewhere. Happy Reading!

Children's librarian, reader of all the books. View All Posts